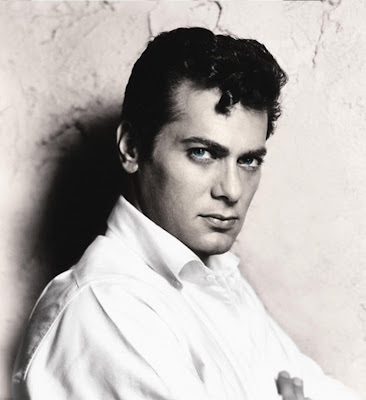 Tony Curtis, a classically handsome movie star who earned an Oscar nomination as an escaped convict in Stanley Kramer’s 1958 movie The Defiant Ones

His death was confirmed by the Clark County coroner, The Associated Press reported.

As a performer, Mr Curtis drew first and foremost on his startlingly good looks. With his dark curly hair, worn in a sculptural style later imitated by Elvis Presley, and plucked eyebrows framing pale blue eyes and wide, full lips, Mr. Curtis embodied a new kind of feminized male beauty that came into vogue in the early 1950s. A vigorous heterosexual in his widely publicized (not least by himself) private life, he was often cast in roles that drew on a perceived ambiguity: his full-drag impersonation of a female jazz musician in “Some Like It Hot”; a slave who attracts the interest of a Roman senator (Laurence Olivier) in Stanley Kubrick’s
Spartacus

(1960), a man attracted to a mysterious blond (Debbie Reynolds) who turns out to be the reincarnation of his male best friend in Vincente Minnelli’s Goodbye Charlie

But behind the pretty-boy looks could be found a dramatically potent combination of naked ambition and deep vulnerability, both likely products of his Dickensian childhood in the Bronx. Tony Curtis was born Bernard Schwartz on June 3, 1925, to Helen and Emanuel Schwartz, Jewish immigrants from Hungary. Emanuel operated a tailor shop in a poor neighborhood, and the family occupied cramped quarters behind the store, the parents in one room and little Bernard sharing another with his two brothers, Julius and Robert. Helen Schwartz suffered from schizophrenia and frequently beat the three boys. (Robert was later found to have the same disease.)

In 1933, at the height of the Depression, his parents found they could not properly provide for their children, and Bernard and Julius were placed in a state institution. Returning to his old neighborhood, Bernard frequently found himself caught up in gang warfare and the target of anti-Semitic hostility; as he recalled in many interviews, he learned to dodge the stones and fists to protect his face, which he realized even then would be his ticket to greater things. In 1938, Julius Schwartz was hit by a truck and killed.

In search of stability, Bernard made his way to Seward Park High School on the Lower East Side. During World War II he served in the Navy aboard the submarine tender U.S.S. Proteus. His ship was present in Tokyo Bay for the formal surrender of Japan aboard the U.S.S. Missouri on Sept. 2, 1945, which Signalman Schwartz watched through a pair of binoculars. “That was one of the great moments in my life,” he later wrote.

Back in New York, he enrolled in acting classes in the workshop headed by Erwin Piscator at the New School for Social Research, where one of his colleagues was another Seward alumnus, Walter Matthau. He began getting work with theater companies in the Catskills and caught the eye of the New York casting agent Joyce Selznick, who helped him win a contract with Universal Pictures in 1948. After experimenting with James Curtis, he settled on Anthony Curtis as his stage name and began turning up in bit parts in films like Robert Siodmak’s Criss Cross 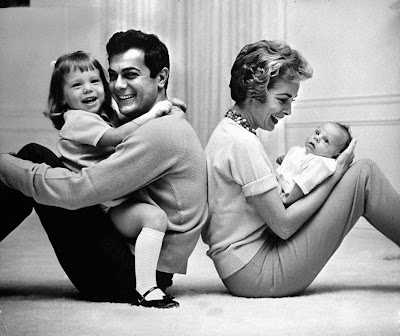 At first, Mr. Curtis’s career advanced more rapidly than Hudson’s. He was promoted to supporting player, billed as Tony Curtis for the first time, in the 1950 western Kansas Raiders — and became, he recalled, first prize in a Universal promotional contest, “Win a Weekend With Tony Curtis.” With his next film, the Technicolor Arabian Nights adventure The Prince Who Was a Thief

(1951), he received top billing. His co-star was Piper Laurie, another offspring of Jewish immigrants (born Rosetta Jacobs), with whom he was paired in three subsequent films at Universal, including Douglas Sirk’s No Room for the Groom

, a 1952 comedy that allowed Mr. Curtis to explore his comic gifts for the first time.

In 1951, Mr. Curtis married the ravishing MGM contract player Janet Leigh, whose beauty rivaled his own. The highly photogenic couple soon became a favorite of the fan magazines, and their first movie together, George Marshall’s Houdini

(1953), was also Mr. Curtis’s first substantial hit. Perhaps the character of Houdini — like Mr. Curtis, a handsome young man of Hungarian-Jewish ancestry who reinvented himself through show business — touched something in Mr. Curtis; in any case, it was in that film that his most consistent screen personality, the eager young outsider who draws on his charm and wiles to achieve success in the American mainstream, was born.

, in which he co-starred with Ms. Leigh but did not utter the line, “Yondah lies da castle of my foddah,” that legend has attributed to him. His career seemed stalled until Burt Lancaster another actor who survived a difficult childhood in New York City, took him under his wing.

Mr. Lancaster cast Mr. Curtis as his protégé, a circus performer who becomes his romantic rival, in his company’s 1956 production Trapeze

. But it was Mr. Curtis’s next co-starring appearance with Mr. Lancaster — as the hustling Broadway press agent Sidney Falco, desperately eager to ingratiate himself with Mr. Lancaster’s sadistic Broadway columnist J. J. Hunsecker in The Sweet Smell of Success

(1957) — that proved Mr. Curtis could be an actor of genuine power and subtlety.

The late ’50s and early ’60s proved to be Mr. Curtis’s heyday. Taking his career into his own hands, he formed a production company, Curtleigh Productions, and in partnership with Kirk Douglas assembled the 1958 independent feature The Vikings — a rousing adventure film, directed by Richard Fleischer, that has become an enduring favorite. Later in 1958, the producer-director Stanley Kramer cast Mr. Curtis in The Defiant Ones

, as a prisoner who escapes from a Southern chain gang while chained to a fellow convict, who happens to be black (Sidney Poitier). The film may seem schematic and simplistic today, but at the time of its release it spoke with hope to a nation in the violent first stages of the civil rights movement and was rewarded with nine Oscar nominations, including one for Mr. Curtis as best actor. It was the only acknowledgment he received from the Academy of Motion Picture Arts and Sciences during his career. 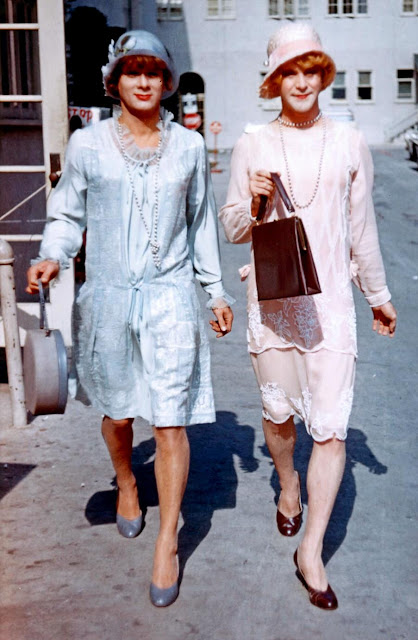 Mr. Curtis began a creatively rewarding relationship with the director Blake Edwards with a semi-autobiographical role as a young hustler working a Wisconsin resort in Mister Corey (1957), which followed by two hugely successful 1959 military comedies: The Perfect Furlough

, in which he played a submarine officer serving under a captain played by Cary Grant. Under Billy Wilder’s direction in Some Like It Hot

, another 1959 release, Mr. Curtis employed a spot-on imitation of Grant’s mid-Atlantic accent when his character, posing as an oil heir, attempts to seduce a voluptuous singer (Marilyn Monroe). His role in that film — as a Chicago musician who, with his best friend (Jack Lemmon), witnesses the St. Valentine’s Day Massacre and flees to Florida in women’s clothing as a member of an all-girl dance band — remains Mr. Curtis’s best-known performance.

Success in comedy kindled Mr. Curtis’s ambitions as a dramatic actor. He appeared in Mr. Douglas’s epic production of Spartacus

, directed by Stanley Kubrick, and reached unsuccessfully for another Oscar nomination in The Outsider (1961), directed by Delbert Mann, as Ira Hayes, a Native American who helped to raise the flag at Iwo Jima. In The Great Imposter

, directed by Robert Mulligan, he played a role closer to his established screen personality: an ambitious young man from the wrong side of the tracks who fakes his way through a series of professions, including a monk, a prison warden and a surgeon.

Mr. Curtis’s popularity was damaged by his divorce from Ms. Leigh in 1962, following an affair with the 17-year-old German actress Christine Kaufmann, who was his co-star in the costume epic Taras Bulba

. He retreated into comedies, playing out his long association with Universal in a series of undistinguished efforts including 40 Pounds of Trouble

, Blake Edwards’s 1965 celebration of slapstick comedy, Mr. Curtis parodied himself as an impossibly handsome daredevil named the Great Leslie, and in 1967 he reunited with Alexander Mackendrick, the director of Sweet Smell of Success, for an enjoyable satire on California mores, Don’t Make Waves. 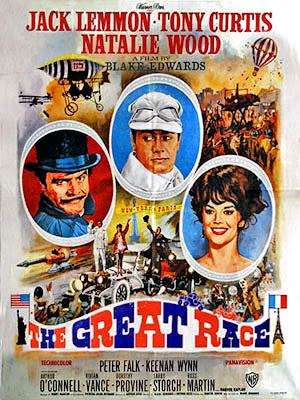 Mr. Curtis made one final, ambitious attempt to be taken seriously as a dramatic actor with The Boston Strangler

in 1968, putting on weight to play the suspected serial killer Albert DeSalvo. Again under Richard Fleischer’s direction, he turned in an effective, rigorously de-glamorized performance, but the film was dismissed as exploitative in many quarters (“An incredible collapse of taste, judgment, decency, prose, insight, journalism and movie technique,” Renata Adler wrote in The New York Times), and failed to reignite Mr. Curtis’s fading career. He divorced Ms. Kaufmann and married a 23-year-old model, Leslie Allen, that same year.

After two unsuccessful efforts to establish himself in series television, The Persuaders (1971-72) and McCoy (1975-76), Mr. Curtis found himself in a seemingly endless series of guest appearances on television (he had a recurring role on “Vegas” from 1978 to 1981) and supporting performances in ever more unfortunate movies, including Mae West’s excruciating 1978 comeback attempt, Sextette

. A stay at the Betty Ford Center followed his 1982 divorce from Ms. Allen, but Mr. Curtis never lost his work ethic. He continued to appear regularly in low-budget movies (he played a movie mogul in the spoof Lobster Man from Mars

, (1989) and and occasionally in independent films of quality (Nicholas Roeg’s 1985 Insignificance

opposite Theresa Russell as a Monroe-like actress). He took up painting, selling his boldly signed Matisse-influenced canvases through galleries and department stores.

After divorcing Ms. Allen, Mr. Curtis was married to the actress Andrea Savio (1984-92) and, briefly, to the lawyer Lisa Deutsch (1993-94). He married his sixth wife, the horse trainer Jill Vandenberg, in 1998, and with her operated Shiloh Horse Rescue, a nonprofit refuge for abused and neglected horses, in Sandy Valley, Nev.

He published “Tony Curtis: The Autobiography,” written with Barry Paris, in 1994 and a second autobiography, “American Prince: A Memoir,” written with Peter Golenbock, in 2008. In 2002, he toured in a musical adaptation of “Some Like It Hot

,” in which he played the role of the love-addled millionaire originated by Joe E. Brown in the film. This time, the curtain line was his: “Nobody’s perfect.” His final screen appearance was in 2008, when he played a small role in David & Fatima, an independent budget film about a romance between an Israeli Jew and a Palestinian Muslim. His character’s name was Mr. Schwartz.
Posted by Helen van Rensselaer at 2:26 PM