For Deliciously Bad Holiday Viewing, NOTHING Can Compare With SANTA CLAUS The Movie! 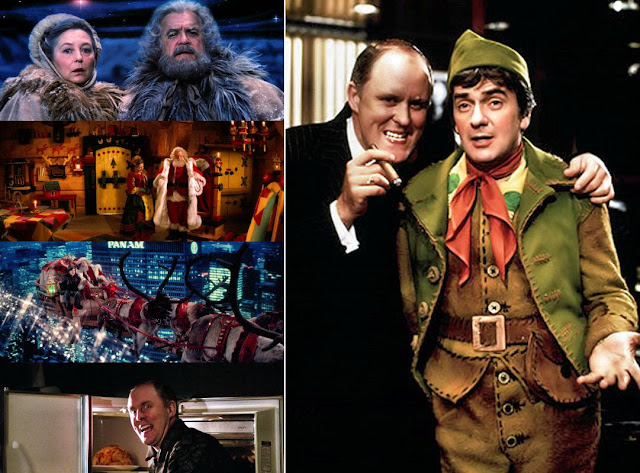 Ever wonder where Santa came from, and how it's possible he's been around so long? Santa Claus the Movie

will tell you. It seems that in a faux medieval land there was a woodcutter who liked to make toys for children. Returning home one snowy Christmas Eve, Claus (David Huddleston) and the missus (Judy Cornwell) and the two reindeer pulling their sleigh froze to death in a sudden storm. But magic starlight reanimates them, as elves in green felt shanghai them to a Brigadoon-like North Pole HQ. "This is your home now," they titter evilly to the undead Santa, and so he's stuck there forever, amongst the barracks full of elves and sweatshops full of toys, which the immortal elves have been making in anticipation of his arrival.

Ancient elf Burgess Meredith tells Huddleston that he is "the chosen one," and that a prophecy foretold his coming. In this way, Santa Claus the Movie is just like The Matrix, only instead of being cool and exciting it's bizarro and satanically corrupt. More mysterious and unanswered is the question of how an immortal elf can become ancient -- or has poor old Burgess been shuffling and moaning his way around since the beginning of time?

Santa -- who is just as wooden as his toys -- seems not a whit disturbed by the prospect of an eternal, unrelenting hell of catering to spoiled kiddies around the globe. "Ho ho ho," you can practically hear him say, "I'm undead! Might as well make the best of it." Clueless by nature, he's prone to saying things like, one Christmas Eve, "Tonight there's not a child alive who's not bursting with joy and happiness," apparently oblivious to all the non-Christian children he won't be visiting. The question of the poor kids who invariably are forgotten by the Fat Guy is pushed aside as well -- though we imagine that Mrs. Claus, who lobbied for the exclusion of bad children at Christmastime, perhaps attached a rider to her bill disenfranchising the poor, as well.

Or maybe Santa is just an inhumanely callous monster -- perfectly understandable, given that he is, in fact, undead. By the time we reach the present day, and the second of the three plots in Santa Claus the movie, Santa has met Christian Fitzpatrick, a homeless street urchin who has to beg food off strangers. Santa takes Fitzpatrick hot-rodding in his sleigh as a special treat to cheer him up... but does Claus give the kid a home, parents, or even a warm winter coat? No. He just drops him off to fend for himself promising to return next Christmas Eve. (Not even a crappy wooden toy? Thanks for the buggy ride, Santa!)

The third - and final - plot involves an elf named Patch, (played with dexterous apathy by Dudley Moore), who defects to work for a sinister toymaker named B.Z., (played with the usual scenery-guzzling gusto of John Lithgow). Upon medical advice, we’re not permitted to discuss this subplot at all. (Our doctors have informed us that our medications cannot be upped any further.) Suffice it to say that in all the annals of pestilent filmmaking, this ranks right up there with the complete works of Michael Bay.

You must see Santa Claus the movie, if only to boggle at the horrifying-depths to which a big studio Christmas film can sink. It actually perverts the spirit of the holiday into something creepy, itchy, and laugh-out-loud insane Just be sure to set aside sufficient funds for a lifetime of therapy afterward.
Posted by Helen van Rensselaer at 2:28 PM No comments: Links to this post