'SHOWGIRLS' IS SO HYSTERICALLY FILTHY, YOU'LL BE LAUGHING ALL THE WAY TO YOUR SHOWER TO REMOVE ITS DELICIOUS RESIDUE. 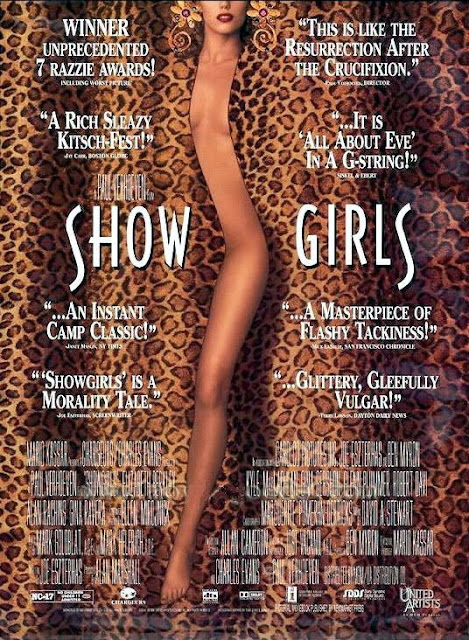 . And how! It's been well noted that writer Joe Eszterhas lifted the plot of Showgirls from All About Eve, 42nd Street and Flashdance. It should also be pointed out that Showgirls owes a major debt to one of my favorite bad movies, Valley of the Dolls. What Eszterhas has done is combine the four femmes from Dolls into just two gals -- with schizo results. Elizabeth Berkley behaves like both a nice newcomer seduced by her boss and a self-destructive, psychotic bitch; costar Gina Gershon is both a sweet showgirl and a seen-it-all, show-biz monster. Even the stars we hear the filmmakers wanted for the Berkley and Gershon roles, Drew Barrymore and Madonna, couldn't have pulled off playing such split personalities. With two glassy-eyed doorstops in the leads, Showgirls is unadulterated farce from the get-go.

Our show begins when tough, young hitchhiker Berkley gets a lift from hunky sociopath Dewey Weber, who generously drives her to Las Vegas, then steals her suitcase (what does he think is inside?). Down-and-out Berkley moves in with dim-bulb waitress Gina Ravera, who remarks, "I haven't gotten laid in six months. My right hand's so tired I can hardly thread a needle!" Soon Berkley's got a gig as a cheesy stripper, but when she gets a look at the Big Time at the hotel Ravera works at, she witnesses a real Vegas show starring Gershon (who, despite the rhinestones glued to her boobs, is indistinguishable from any of the other dancers). A coked-up Gershon turns up at Berkley's strip joint with her hotel boss/lover Kyle MacLachlan, and pays Berkley $500 for a nude lap dance, during which Berkley, in a fit of originality, licks her own nipple. Whereupon Gershon encourages Berkley to audition for the hotel show.

Surveying the line of hopefuls, snide show producer Alan Rachins snarls at the first, "What are these, watermelons? This is a stage, babe, not a patch!" Viewing Berkley's nipples, he leers, "I'm erect, why aren't you?" Berkley is hired and proceeds to witness the dog-eat-dog world of showgirls: one chorine growls at seamstress Ravera, "You're gonna see a smilin' snatch if you don't fix this G-string." Well, maybe it's more dog-eat-dog-food: over lunch Gershon tells Berkley, "I've had dog food. I used to love Doggie Chow," and Berkley gushes, "I used to love Doggie Chow, too!" The brief bonding over pet food experiences ends when Gershon plays with Berkley's breasts, cooing, "You are a whore," and Berkley rejects her, sneering, "Bitch!" 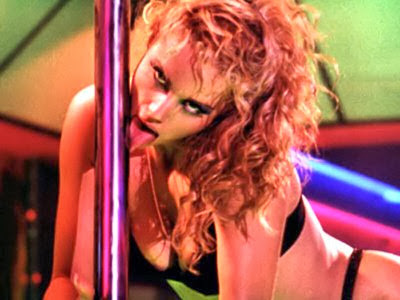 Berkley is visited in her new, "classier" digs by her old strip-club pals, one of whom thinks Berkley "looks better than a 10-inch dick," and the other of whom comments, "Must be weird not having anybody come on you." Flush with success, Berkley goes after druggy McLachlan. Naked in his pool, she sits on him and does a whiplash-like imitation of sex which resembles nothing so much as an epileptic fit. (You'll want to add some Tide and throw in your laundry!) Then, having stolen Gershon's guy, she shoves Gershon down a staircase, and that night she takes Gershon's place in the show and becomes a star (although she, like Gershon, blends right into the chorus). Her triumph is spoiled when pal Ravera is gang-raped by a rock star and his friends. Suddenly, Showgirls veers off into Cleopatra Jones/Coffy territory, with Berkley becoming a martial-arts super-heroine -- Ninja Showgirl? -- who kicks the rocker senseless. After French-kissing Gershon farewell, an older, wiser Berkley blows town, hitching a ride with, yep, luggage thief Weber. The duo heads for L.A.--to work, we hope, for Zalman King in a sexy cable TV series lifted from their roles here: each week, a little lap-dancing, a little crime-fighting. (Well... I'd lap it up).
Posted by Helen van Rensselaer at 2:17 AM 2 comments: Links to this post 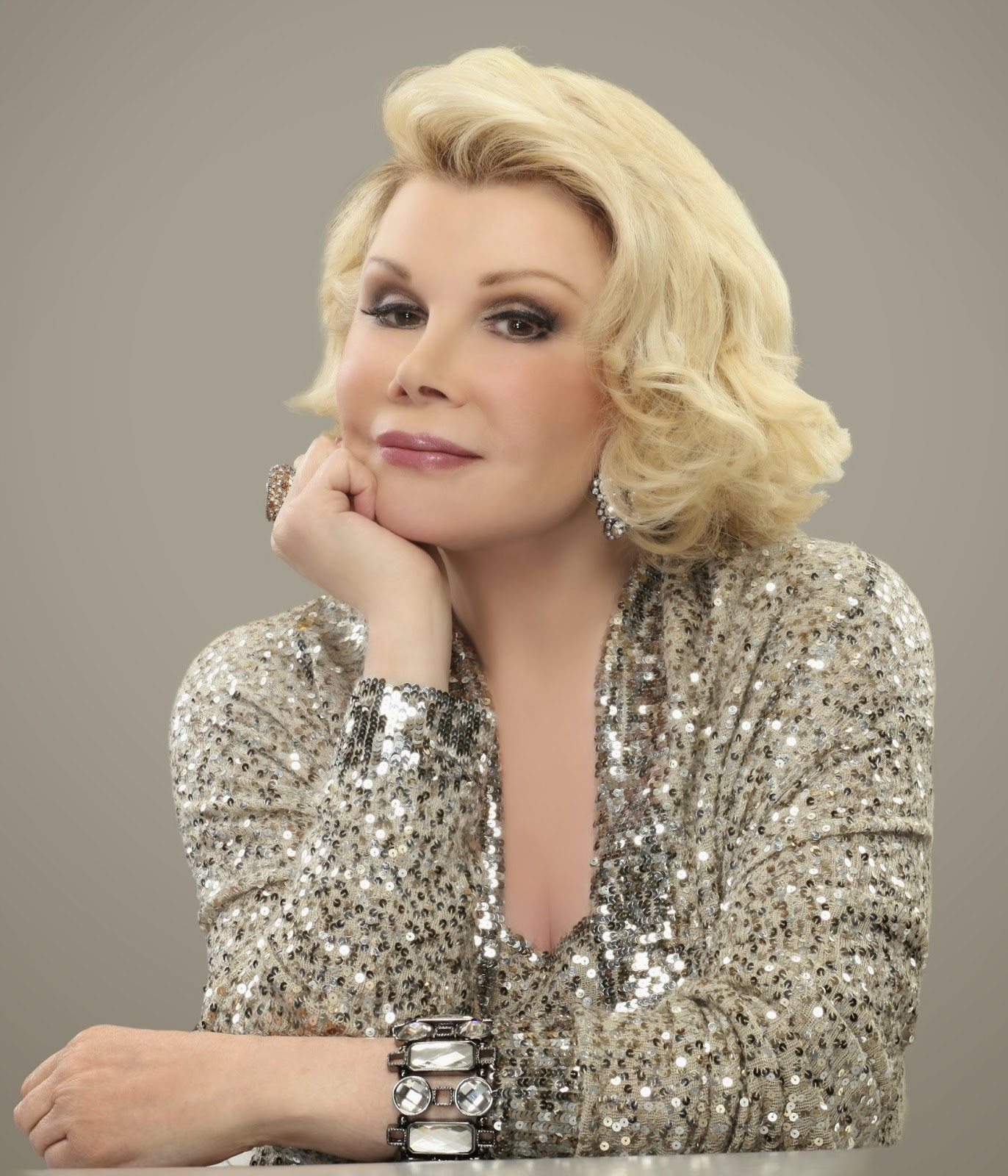 “When I die (and yes, Melissa, that day will come; and yes, Melissa, everything’s in your name), I want my funeral to be a huge showbiz affair with lights, cameras, action…I want Craft services, I want paparazzi and I want publicists making a scene! I want it to be Hollywood all the way. I don’t want some rabbi rambling on; I want Meryl Streep crying, in five different accents. I don’t want a eulogy; I want Bobby Vinton to pick up my head and sing ‘Mr. Lonely.’ I want to look gorgeous, better dead than I do alive. I want to be buried in a Valentino gown and I want Harry Winston to make me a toe tag. And I want a wind machine so that even in the casket my hair will be blowing just like Beyoncé's."   ~ Joan Rivers, from her 2012 book, I Hate Everyone... Starting With Me

At a funeral befitting a superstar, the New York City Gay Men's Chorus sang Broadway hits including "Hey Big Spender" before six-time Tony Award-winner McDonald sang her tribute to Rivers, a champion of theater for decades.

Tributes and reminiscences were delivered by TV anchor Deborah Norville, close friend Margie Stern, columnist Cindy Adams and Rivers' daughter, Melissa, who spoke about how she respected her mother and appreciated everyone's support.

"It was uplifting. We were celebrating her life," said fashion designer Dennis Basso.

Hugh Jackman sang "Quiet Please, There's A Lady On Stage" at the end of the ceremony and bagpipers from the New York City Police Department played on the streets as mourners filed out of Temple Emanu-El, many dabbing their eyes.

The funeral program included a page with three classic Rivers' lines printed out: "Can we talk?" ''Who are you wearing?" and "Because I'm a funny person." 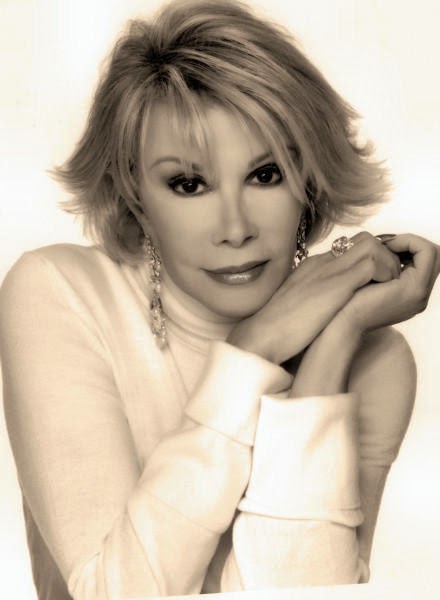 Mourners had lined up outside the Fifth Avenue synagogue and waited for their names to be checked against a list before entering. A crowd of media stood watch across the street, and fans from as far away as Australia and England lined the streets.

Actress Susan Claassen, who met Rivers in London in 2008 when both had one-woman shows, came from Tucson, Arizona, to honor her friend. "I always like to say that in a world of knockoffs, Joan was an original," she said.

The comedian detailed in her 2012 book "I Hate Everyone ... Starting With Me" that she hoped for "a huge showbiz affair with lights, cameras, action" and "Hollywood all the way." Instead of a rabbi talking, Rivers asked for "Meryl Streep crying, in five different accents" and "a wind machine so that even in the casket my hair is blowing just like Beyonce's." Indeed, her wishes were so important they were printed in the funeral program.

Rivers was a trailblazer for all comics, but especially for women. The raspy-voiced blonde with the brash New York accent was a TV talk show host, stage, film and TV actress, fashion critic, and she sold a line of jewelry.

The cause of death is being investigated. Rivers was hospitalized on Aug. 28 after she went into cardiac arrest during a routine procedure at a doctor's office. The New York state health department is investigating the circumstances, and the New York City medical examiner said tests to determine the cause of death were inconclusive.

Her publicist said that in lieu of flowers, donations can be made to God's Love, We Deliver; Guide Dogs for the Blind; or Our House.

———
Associated Press writer Alicia Rancilio contributed to this report.
Posted by Helen van Rensselaer at 11:10 PM No comments: Links to this post