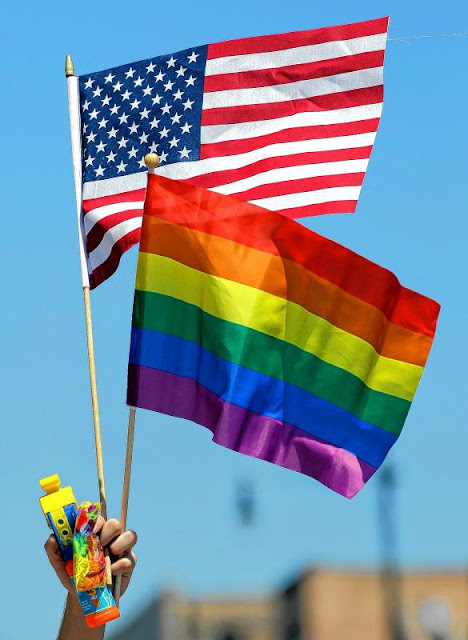 The Supreme Court struck down marriage bans nationwide Friday in a 5-4 decision authored by Justice Anthony Kennedy, the fourth landmark ruling advancing LGBT rights he has written.
In the decision, the justices affirmed that same-sex couples can indeed marry in every state in the union.

The case, Obergefell v. Hodges, centered on legal challenges on behalf of lesbian and gay individuals from four states in the Sixth Circuit who sought the same constitutional guarantees afforded to different-sex couples couples who unite their lives in marriage.

(And naturally, FOX NEWS's coverage has got to be seen to be believed.)


7:15 AM PT: Tweet from President Obama: "Today is a big step in our march toward equality. Gay and lesbian couples now have the right to marry, just like anyone else. #LoveWins"

7:19 AM PT: From the opinion: "These considerations lead to the conclusion that the right to marry is a fundamental right inherent in the liberty of the person, and under the Due Process and Equal Protection Clauses of the Fourteenth Amendment couples of the same-sex may not be deprived of that right and that liberty. The Court now holds that same-sex couples may exercise the fundamental right to marry."


7:42 AM PT: From the opinion: "No union is more profound than marriage, for it embod- ies the highest ideals of love, fidelity, devotion, sacrifice, and family... It would misunderstand these men and women to say they disrespect the idea of marriage. Their plea is that they do respect it, respect it so deeply that they seek to find its fulfillment for themselves. Their hope is not to be con- demned to live in loneliness, excluded from one of civilization’s oldest institutions. They ask for equal dignity in the eyes of the law. The Constitution grants them that right."

8:05 AM PT: Plaintiff Jim Obergefell at the steps of the Supreme Court: "It's my hope that the term 'gay marriage' will soon be a thing of the past—that from this day forward, it will simply be called 'marriage.'"

8:26 AM PT: Obergefell also talks about the events in Charleston: "My heart is also in Charleston. These past few weeks and months have been an important reminder that discrimination in many forms is alive and well in America... [that] progress for some is not progress for all."

Posted by Helen van Rensselaer at 11:33 AM No comments: Links to this post