In the delicious 2000 film FINAL DESTINATION, 'The 'Omen'--like setup, (a grisly death every 15 minutes or so), rolls along like a funhouse ride. 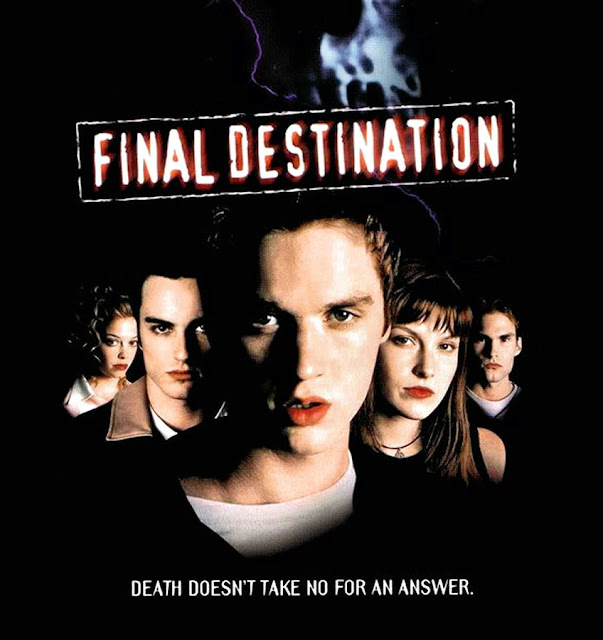 Here's one that won't be shown on transcontinental flights anytime soon. FINAL DESTINATION

, a great piece of cinematic junk food, opens with one of the most frightening depictions of airplane disaster you've ever seen, and if you can get past that, you'll be shoveling the popcorn in, begging for more.

Devon Sawa and his really white classmates board a plane for an end-of-the-year field trip. Among them are Dawson's Creek star Kerr Smith as your garden-variety jock jerk and Ali Larter as that most head-scratching of movie constructs, the gorgeous geek who's obviously the coolest chick in school. Sawa has a vision of the aircraft going up in flames, so of course he causes a scene and gets himself, his buddy, Smith, Smith's girlfriend, Seann William Scott and a teacher thrown off. Larter follows -- because she's got second billing -- and Smith throws a hissy fit until they see the plane become a fireball in mid-air. Sawa rationally concludes that they were all supposed to die, and that Death will soon be tracking them down.

Is he psychic? The movie doesn't seem to care, so why should we?

And here's where we get down to the nitty gritty: Death dispatches pouty starlets and mouth-breathers with a creativity we haven't seen since Jason Voorhees left the cineplex. A groovy variation on the teen-slasher movie, FINAL DESTINATION turns even the most mundane household items into torture devices. Director James Wong has a blast making us second-guess what he'll use to off his characters, and we wouldn't dream of spoiling any of the jolts for you. It's also nice to see a post-SCREAM thriller get laughs not from a more-ironic-than-thou aesthetic, but from horror-movie camp laid on as thick as your grandma's fruitcake. (Seconds after a friend is decapitated, a straight-faced Larter tells Sawa, "Get your head together!")

The DVD extras play like a slumber party, with kooky interactive games helpfully revealing the date of your death (to the hour) and the amount of clairvoyant ability you possess, as well as the story of a real-life psychic! (Cue the "Twilight Zone" theme.) On a more intriguing note, the filmmakers include a documentary about the test-screening process, and how it saved FINAL DESTINATION from being as pretentious as the latest Michelle Pfeiffer snooze-fest. We're all for directors keeping their work pure, but let's get real: no one would mistake FINAL DESTINATION for an art film. It is, however, loads of trashy fun.
Posted by Helen van Rensselaer at 2:57 PM No comments: Links to this post 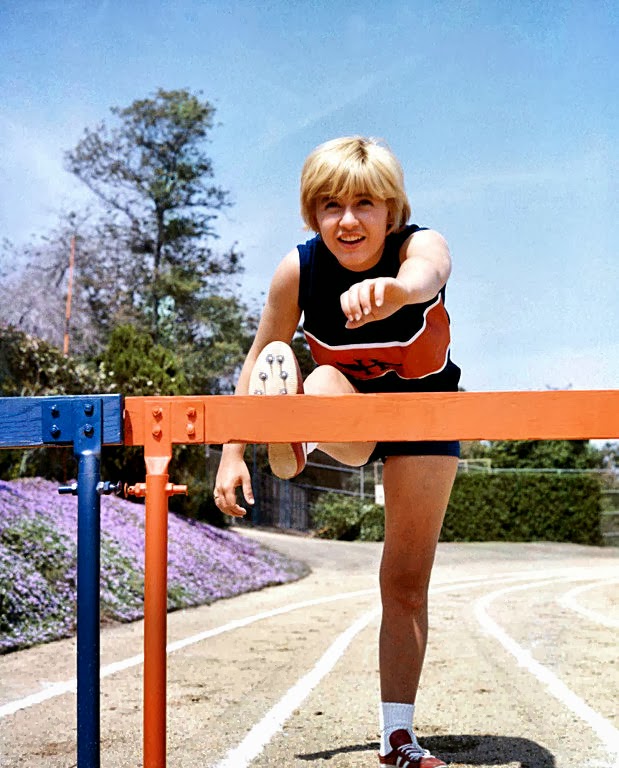 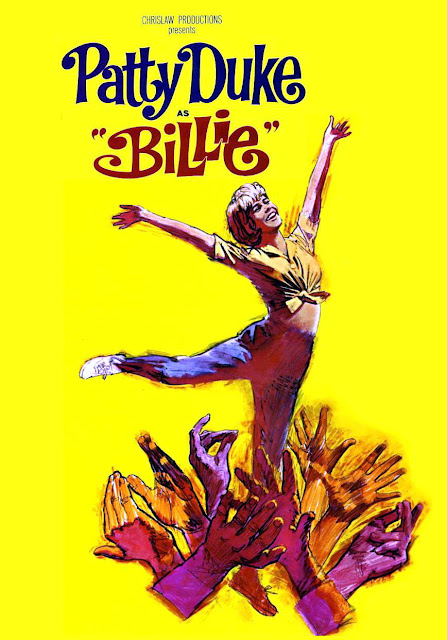 Even as Duke's jockeying-for-mayor dad Jim Backus is campaigning that women shouldn't compete against men, Duke's on the high school track field, showing new-kid-in-town Warren Berlinger how she races faster than sound, using her special trick of listening to "the beat" inside her head. Under her coaching, he improves, but it's Duke who's the speed demon, and when the coach sees her whiz by, he asks her to try out for the otherwise all-male track team. 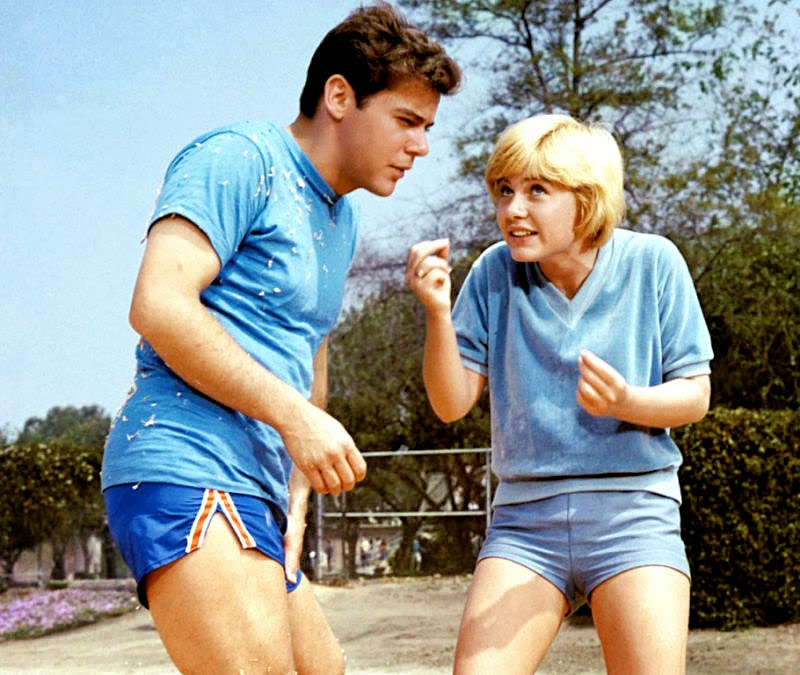 Aware Duke's racing could embarrass his campaign slant, "liberal" Backus supports her anyway -- though, when Duke sighs, "I wish I was a boy," he tells her the four little words every daughter's gotta hear sometime: "Well, so do I!" In her room, holding track shoes in one hand and a perfume bottle in the other, Duke belts such bizarre song lyrics -- "What good is growing up, if this is all it means? I'm an in-between, a lonely little in-between!" -- it seems the movie might veer off into a sex-change-op saga, Bill or Billie?, but no such luck.

Duke makes the team, but is unhappy when given a dressing room away from the boys' locker room: she wants equality! Backus and wife Jane Greer wish Duke were more like her ultrafeminine, just-back-from-college sister Susan Seaforth, but when they learn just how well sis embodies Backus's new campaign slant, "Everyone should be allowed to do exactly what they want" -- she's secretly wed and pregnant -- Backus rages, "Somebody should have told me [your major] was sex!" 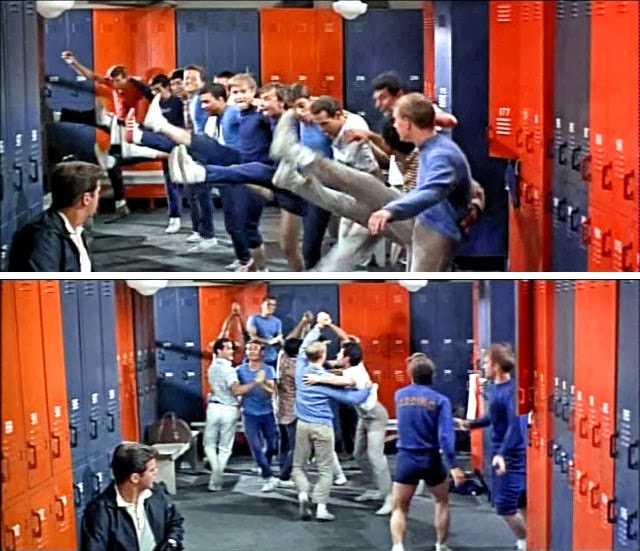 Life magazine turns up to do a cover story on Duke, and she explains "the beat" in her noggin thusly: "Track-and-field is like dance without music. And when you add the music, zoom -- off you go!" Duke and her pals teach "the beat" to the boys, resulting in a terrible go-go extravaganza out of an old Ann-Margret movie -- but, since Duke can't much dance, she literally runs offscreen to allow A-M sub Donna McKechnie room to Watusi. Later, while slow dancing, Duke and Berlinger fall in love. Yep, she heads for her room to croon another solo, but we'll spare you the details.

In another jaw-dropping production number, we learn the track team lads don't mind that Duke's always running yards ahead of them. Their song-and-dance about Duke's purported feminine charms inadvertently reveals their own: while singing, "Though we can't outrace her, we love to chase her, she leaves a trail of sweet perfume--the girl is a girl is a girl, even in a locker room!" the guys form a Rockettes-style kick line, and, yes, even pair off to do a two-step.

(At this point, I had to send my youngest - little Jimmy jr - to retrieve mommy's special smelling salts from the medicine cabinet.)

Unhappy that Berlinger treats her as "a girl first," Duke angrily vows to beat him at the Big Track Meet. She wins the day -- and a date with him to Backus's campaign gala. In a pink party dress, her hair teased to pass muster as a Dee do, Duke gushes, "Being a girl is so much fun, I've decided to give up track." Then, to let us know she'd only been flirting with feminism, she sings, "I am the girl that's a girl and I'm proud as I can be! Just to be glad I'm a girl is my greatest victory!" Duke's autobiography states Billie was shot in 15 days; it looks more like 15 minutes. Find this video, for a guaranteed hoot every 15 seconds.
Posted by Helen van Rensselaer at 8:42 PM 4 comments: Links to this post 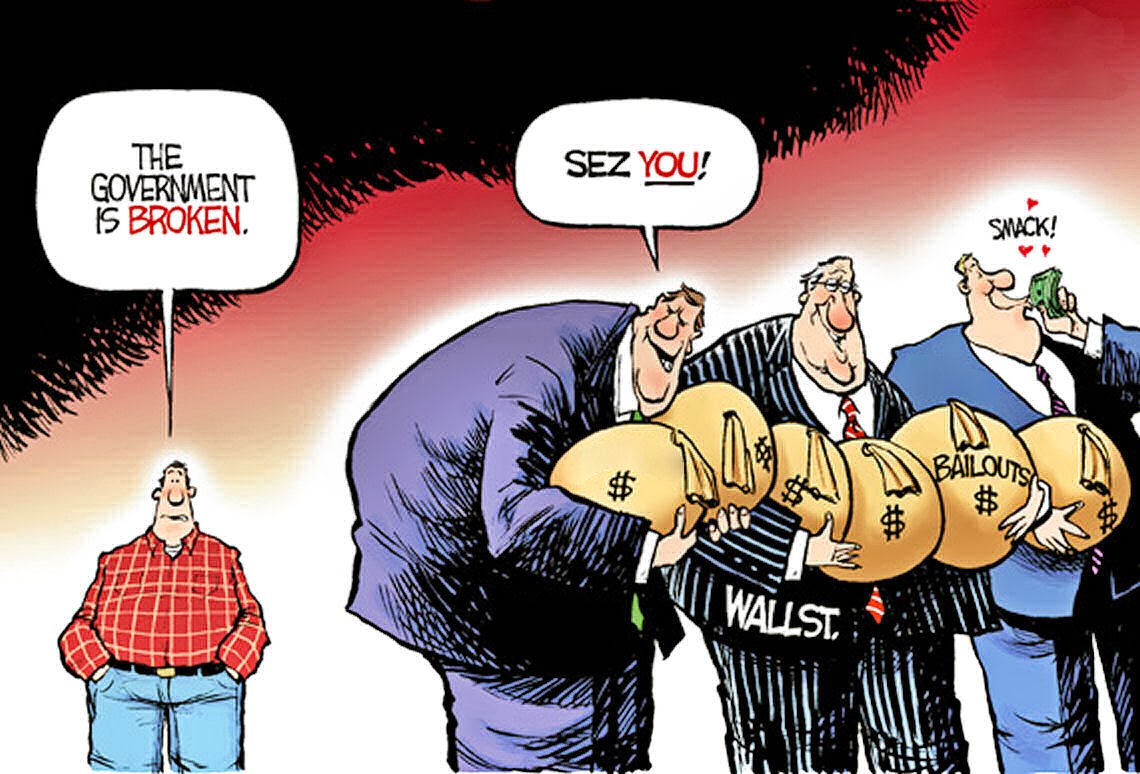 Posted by Helen van Rensselaer at 9:03 PM No comments: Links to this post

1989's THE WAR OF THE ROSES marked the brief, delicious return of the true black comedy 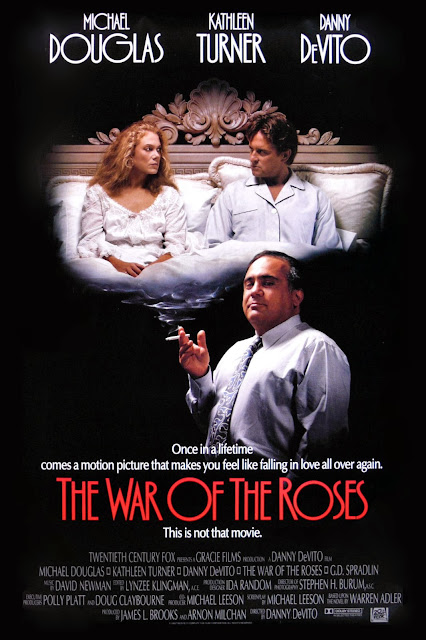 The 1980s were marked by a series of shameless, mean-spirited comedies celebrating the joys of middle class materialism -- from Risky Business to The Secret of My Success to any film starring former "Saturday Night Live" comics -- Chevy Chase, Bill Murray, Eddie Murphy, etc. Extreme amorality in the pursuit of social gain was no vice in these comedies. No matter how nasty the characters were -- Bill Murray in Scrooged and Ghostbusters for example -- they never had to account for their actions. The ends always justified the means. Thankfully, director Danny Devito's dark masterpiece The War of the Roses

offerred no such assurance. As in the great black comedies of the past -- Monsieur Verdoux, Dr. Strangelove, Lolita, Sunset Boulevard -- the characters must face retribution. The story of Barbara and Oliver Rose (Kathleen Turner and Michael Douglas) starts out mimicking classic Hollywood screwball comedies like The Awful Truth or His Girl Friday, in which estranged husbands and wives are eventually reunited through a series of amusing incidents. Then, slowly, the film turns and you find yourself gagging on your guffaws as these partners in a disintegrating marriage engage in mutual assured destruction. 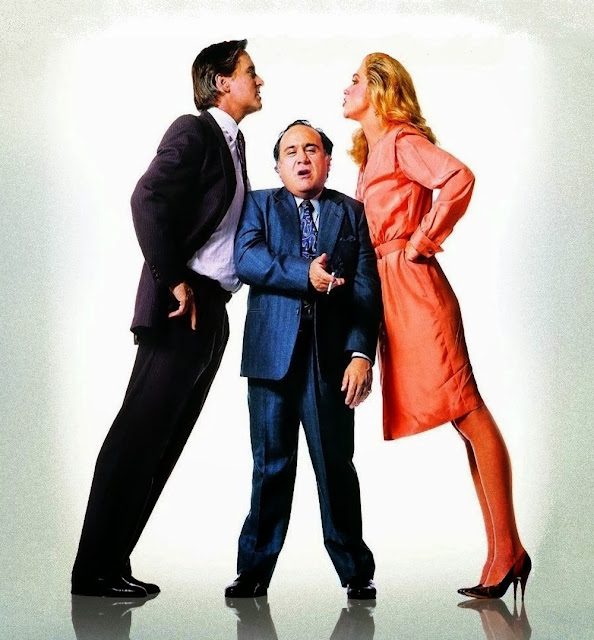 The War of the Roses is often hilarious, but this comedy is not pretty. Rather, it is a bracing splash of carbolic acid in the face of romance and is thus likely to make a lot of people very uncomfortable. Toying with the conventions of domestic comedy is inflammatory stuff, particularly at a time when we're used to drinking our genres straight up. After all, in 1986, when Jonathan Demme messed with our expectations in Something Wild, shifting to a menacing tone in the second half, the audience turned on him. (Perhaps the film was just a little ahead of its time.) Woody Allen's Crimes and Misdemeanors (1989) also mixed comedy with darker material, and, this time, audiences responded to it. The War of the Roses is more subversive and corrosive than either of those films, however. And if the film is marred by a rather heavy-handed dose of misogyny (it's no coincidence that the movie was directed and written by men -- DeVito and Michael Leeson, respectively), you still have to give credit to any comedy that can make you feel this queasy. Like the Demme and Allen films, The War of the Roses wreaks havoc with our value systems and forces us to face up to the resulting mayhem. An alternative title for the film -- uttered by Turner at one point and originally credited to Dorothy Parker -- could be "What fresh hell is this?"
Posted by Helen van Rensselaer at 7:39 PM No comments: Links to this post

WARNING: Watching the deliciously nutso sci-fi film 'DECOYS' will eliminate all your bladder control. Wear your pampers, dears, (You are going to pee.) 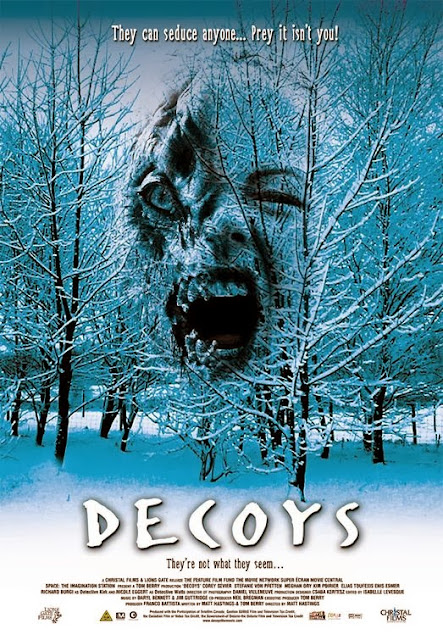 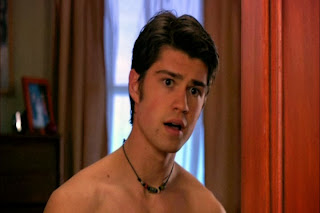 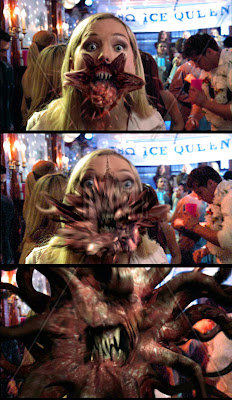 Understandably, these buxom alien hotties meet with very little resistence from almost every man on campus. But our hero, (sexy dorm-dwelling freshman Corey Sevier), isn't just ANY man. You see, After sneaking into a sorority girl's dorm room to return some quarters, Sevier spies one of the alien tarts sprouting tentacles in front of her roomie - who's casually huffing away on liquid nitrogen (Don't ask). And so Sevier comes to the conclusion that these two are, in fact, not of this planet - though none of his friends wants to believe him. But after a pair of suspicious deaths, Sevier becomes convinced he's right. Armed with a flame-thrower, and a seemingly bottomless reservoir of horrendously bad Schwarzenneger-style one-liners, ("Belt of Orion?" screams our gas-torch wielding hero. "How about Belt of O'FRYIN'?" ), he begins investigating. 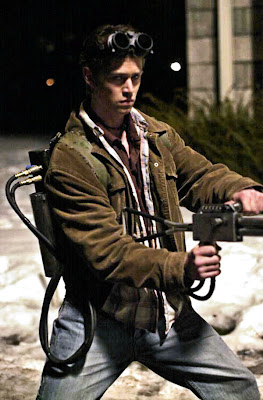 DECOYS isn't going to be included on anyone's list of the all-time greatest sci-fi horror flicks, but it definitely had us in stitches from start to finish. This is a film where a man hauled into the police station as the chief suspect for a string of murders will happily explain his crackpot theory about diabolical spacesluts, and never mention the fact that he has a rock solid alibi. It's the kind of film where the investigating detective (Richard Burgi in full ham mode) repeatedly - and inexplicably - refers to said suspect as "puppy". And it's the kind of film where the hero dresses up as a Ghostbuster, demands complete strangers show him their navels, and hurls boiling-hot water at them to prove they're not of this earth. (Quite frankly, the guy's clearly insane and should be locked up - whether he's correct or not!) 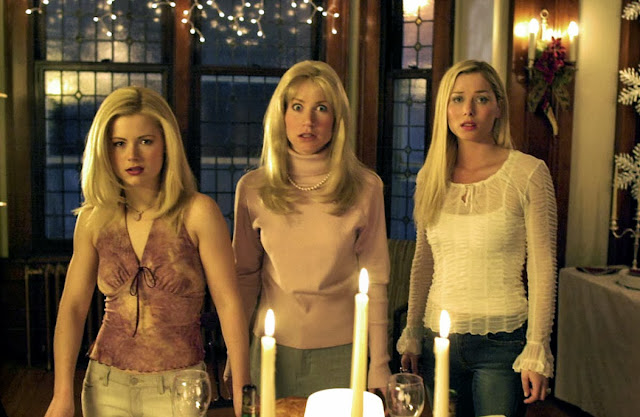 Posted by Helen van Rensselaer at 1:20 AM No comments: Links to this post