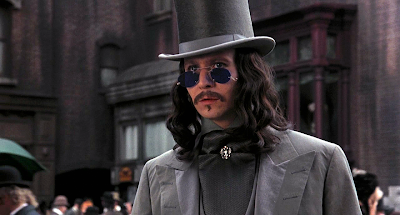 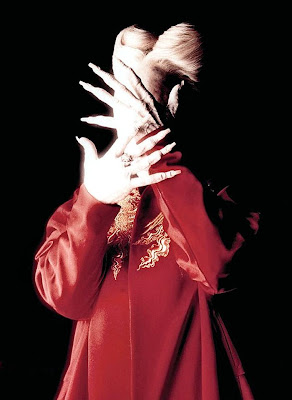 Perhaps it was the disgraceful (even by republican standards) shenanigans of the former Bush/Cheney administration finally getting to me... or maybe it's the current idiotic behavior of the G.O.P. over Obama's yet to be unveiled health care plan... but more than likely, it is the impending visit of Magda, my hateful mother-in-law, that possessed me to watch a movie about a blood-sucking demon from hell who preys on innocent victims with sinister abandon and then laughs about it.

Francis Coppola's DRACULA saga is an extravagantly nutso affair shot through with several terrible performances. (No letters please, you know who they are.) But if you're going to have one really good performance in a vampire movie, it helps if it's from the actor playing Dracula. Gary Oldman is so much the life of Bram Stoker's Dracula

that we the audience, unlike the characters in the movie, are safe only when Dracula is around.

Oldman's Dracula is by no means scary -- going for scary probably would have been futile and fatal -- but he is creepy, unpredictable, funny, sexy and compulsively watchable. (Just like my husband Jim after a few highballs.) Oldman succeeded in invoking the familiar, ghoulish Dracula with ease and wit, while at the same time evoking a new, modern, "F"d-up Dracula that has the kick of the unexpected. How difficult was Oldman's job? For starters, he was actually playing several different characters -- the medieval warrior; the crazed, debauched old man; the hairy giant bat; the seductive prince. That alone was potential chaos. But he also has a movie sliding off into silliness all around him. And he had gobs of makeup to contend with. You could see how the guy who became famous playing rock psycho Sid Vicious would have no problem handling this last challenge -- Oldman could act right through a brick wall, not to mention heavy prosthetics. How Oldman succeeded in keeping Coppola's sputtering blarney half-afloat is another matter.

Oldman seems to have thought a lot about how someone who has been pursuing a very bad habit for 400 years might feel and behave. On the one hand, the relic in the castle who unnerves Keanu Reeves is a combination of cheesy Bela Lugosi tribute and purely original strangeness -- as the terrifying razor-licking scene shows. The lethal geezer has the manners of someone who hasn't been out in public in a few centuries. (Which brings to mind my Aunt Marie, just before we had her put down. But I digress.) On the other hand, the blue-spectacled fashion plate who fascinates Mina (Winona Ryder) is all seductive single-mindedness, with a subtle -- here's the key and the surprise -- vulnerability. The elegant prince has been consumed by a love since the fall of Constantinople -- and he has the gaze to prove it. 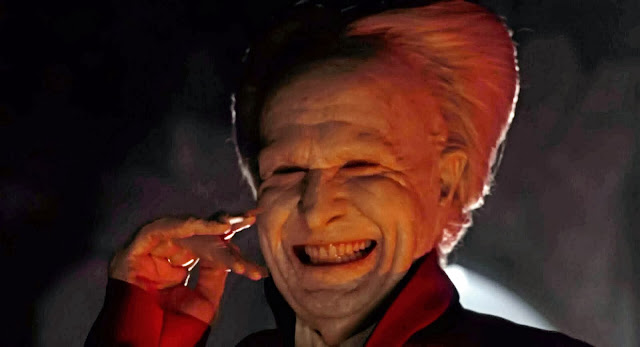 Besides giving Dracula a low voice and slooowww way of talking (why hurry when you've seen everything and you're never going to die?), Oldman paid special attention to his character's eyes. Dracula almost never blinks, telegraphing that, physically speaking, he doesn't have normal human needs, and metaphorically speaking, he can't be surprised or intimidated. (It was my hateful mother-in-law that inspired me after all!) The moment when Oldman does have Dracula blink -- when he sees the picture of Mina on Harker's desk, and later when he is with Mina and she is "remembering" his love Elisabeta -- are precisely when his ancient humanity has been aroused. Oldman also uses his hands to feed energy into his portrait of the "undead." The old Dracula, whose palms are hairy (a good joke), does some fancy finger-waving that is complemented by a sort of bat-flapping of the arms when he gets ticked off. A great effect. The prince's hands are flawless, manicured instruments of seduction. Very sexy.

But these are just the specifics of a performance that is thoroughly thought out and fearlessly executed. And all within the confines of a basically terrible movie! With the whole enterprise of Bram Stoker's Dracula pitched so dangerously, and at points disastrously, toward extremism, it was something of a miracle that Oldman managed to resurrect a woefully picked-over legend with the strength of his own dramatic nerve.

Now if you'll forgive me, I have to get little Jimmy jr. busy sharpening those stakes and hanging the traditional strands of garlic in preparation for his grandmother's visit. --  TTFN
Posted by Helen van Rensselaer at 6:12 PM