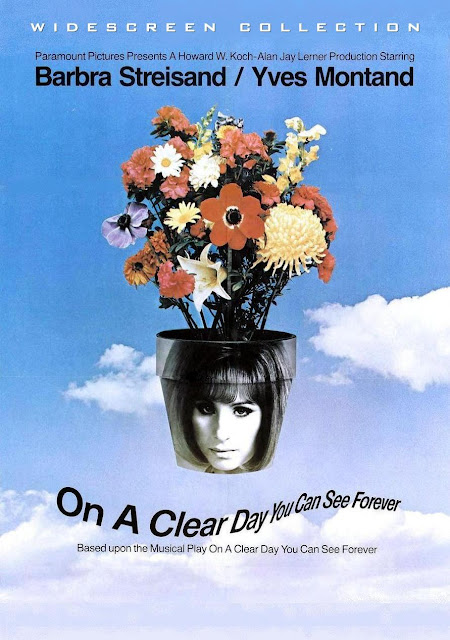 Barbra Streisand combined the kooky and classic sides of her personality perfectly when playing both Daisy and Melinda in her third film, ON A CLEAR DAY YOU CAN SEE FOREVER. Described in Paramount Pictures production notes as a “delightful combination of comedy, drama, fantasy and music, the film deals with a psychiatrist (Yves Montand) who becomes professionally and emotionally involved with a remarkable female patient, who possesses extrasensory powers and relives, under hypnosis, an earlier incarnation.”

Based on the 1965 Broadway success by Alan Jay Lerner and Burton Lane which originally starred Barbara Harris and John Cullum, the producers made some significant changes when transferring the play to the screen. Lerner revised his original story to accommodate the film's director, Vincente Minnelli (Gigi, An American in Paris), who requested that the regression sequences be changed from a Restoration to a Regency setting. Minnelli felt that “white wigs and writing with feathers gets to be very boring.” He wanted to make it Regency, because “the world was more inviting.” Also, several songs from the Broadway show were jettisoned while several new ones were added -and then cut!

Designed to be a sumptuous musical in the tradition of My Fair Lady and Camelot, On A Clear Day was originally meant to be a three hour “road show” release. Road show films were a special theatrical format treated as an event. Most road shows were shown with an overture, an intermission, an Entre Acte and “exit” music. Also, road shows usually had lengthy running times which limited the number of showings per day and therefore cut into studio and theater profit margins. But if a road show film was successful, it could mean a healthy run and large returns. (Think The Sound of Music.) Movie theaters also sold expensive keepsake programs featuring photos and articles about the film to generate even more revenue.

However, by 1970, the world of movies had changed and films began to tackle more contemporary issues. Lacking faith that an "old fashioned" property like Clear Day could attract a large audience, Paramount Pictures decided to abandon the road show format and delivered the film to theaters with an abreviated running time of 129 minutes. This meant that it could squeeze more showings into a day. This also meant that several filmed sequences had to be sacrificed to whittle down the film’s three hour running time. Sadly, Clear Day lost several key musical numbers, subplots, and scenes. It's for this reason that the film has attained a cult status among fans - somewhat like the “lost” version of Judy Garland’s A Star is Born. But unlike A Star is Born, On A Clear Day has never been restored. In fact, the cut sequences have never seen the light of day. It's doubtful that the missing footage still exists, unless the Minnelli estate — or Streisand herself — has preserved them somewhere.

Despite studio interference, Minnelli did an extraordinary job with what would become his last musical. The film is well cast with Jack Nicholson, Larry Blyden, Simon Oakland, Lew Ayers, Mabel Albertson and Bob Newhart lending expert support and Streisand is both reserved and natural as well as remarkably adroit at playing two radically different women in the same body. The colors are glorious. Streisand's period costumes are spectacular. And then there's that score; Magnificent! (The Broadway cast album won the Grammy.) Next to his sublime score to Finian's Rainbow, Clear Day contains composer Burton Lane's most memorable work for the theatre. And while we fans of the film will never stop hoping for the original three hour road show to miraculously turn up on home video one day, all in all, On A Clear Day You Can See Forever is a joy to behold -- in any incarnation.

Posted by Helen van Rensselaer at 1:57 AM